Culture is such a complex word.

Trying Googling it……. Different dictionaries and online encyclopedias which are usually the authority when in doubt, spell out their interpretation of ‘culture’. Just goes to show that for different people ‘culture’ means different things.

If the dictionaries are so confused, think of how confusing it is for a country of 1.25 billion people composed of almost all the major faiths in this world, speaking myriad languages, with extremes of dietary beliefs, with a history that goes back to the beginning of time and a land that has seen invaders and visitors alike, to have one rigid definition of it’s culture.

How can one fathom what is Indian culture?

Yet, when one goes out of India and a mention of ‘Indian culture’ is made, one can immediately get a mental picture of the beautiful images that combine to make up Indian culture.

Living outside India, I can look at India and Indian culture from an outsider’s point of view. Our music, our languages, our religions, our festivals, our dance forms, our ancient art forms, our age old traditions, our beautiful handlooms come to mind.

If I ask my non-Indian friends they will tell me how much they love practicing yoga, how they find our languages fascinating and musical, how intrigued they are with our dance forms, how much they love wearing Lucknowi Chikan work and bandhani outfits and how they swear by Ayurveda treatments. To them, that is Indian culture. To them it is how vibrant our festivals are, how we enthusiastically celebrate something or the other throughout the year. To them, Indian culture is also the Kama Sutra and the depictions in the Khajuraho temples. To them, Indian culture is also it’s pop version that is Bollywood.

To me, Indian culture is all that we do in India and outside India as Indians, to celebrate life.

The festivals, the art forms, languages, music, our history, our mythological legends are all Indian culture.It is also how we project ourselves to the world. In our family, we celebrate Diwali every year and my daughter’s multiracial, multiethnic, many non-Indian friends come to our home and they make ‘diyas’[ lamps] with clay, draw colourful Rangoli patterns on paper, eat Indian sweets. I don’t push religion or any rituals, but we just celebrate in a way that everyone can have a good time. In a few days time, it’s Halloween. By then I’ve taken off the Diwali diyas and removed the Rangoli stickers from the doorway and now placed a carved lit pumpkin at the darkness of the doorstep. We pack away the colourful clothes and get kitted out in our scariest Halloween outfits and go treat or treating. In a span of a few days, we celebrate festivals that are paradoxes. One celebrates good over evil while the other almost glorifies the evils in the world!

Does that make me anti-Indian culture? Not at all! I celebrate both with equal fervour and it does not dilute my beliefs in my religion in any way. My child learns to respect the beliefs of people all over the world not just our own. Likewise with food, we eat Indian food, but also eat sausages, sushi and food from around the world. It doesn’t make us anti –Indian food does it? Yes, we may not like certain foods or I personally don’t eat beef, but I don’t care if my child or anyone else has it. It’s a personal choice and I cannot enforce my view on others, not even my own child, unless it is harmful in some obvious way.

So what I don’t understand is how and why some people who call themselves the MORAL POLICE, decide what is good and bad for us in India. They decide if something is in our Indian ‘culture’ or not.

Couples holding hands and coochie cooing is not permissible by them. It’s anti-Indian culture? C’mon we gave the world the Kama Sutra. Babies don’t arrive by post…….this is normal, in case you don’t know. What has it got to do with harming Indian culture? Indian culture is too strong rooted and firm to be shaken by harmless people who express their love for each other.

Why don’t these moral police leave the love birds alone and if they really want to safeguard what our culture stands for go outside any college where their brethren will be seen indulging in the worst, filthy behaviour which is against Indian culture or any culture for that matter. I’m talking about eve teasing, which is a disgraceful rot in our Indian society and how come the moral custodians of our culture conveniently accept this? If anyone cares about Indian culture and the dignity of Indian women, I would suggest they weed out eve teasing first. Eve teasers ape our filmy heroes and our films say they imitate life. It’s time the censor boards which are the custodians of our filmy culture [ which influences us so much], recognized eve teasing as not a harmless flirtatious behaviour but a disgusting, loatheful practice and edited it out, even it means banning a complete film. Now, that would be an act of really protecting our Indian culture!

The kind of item numbers that spill out of our films[Bollywood/ Kollywood/Tollywood,] the vulgar dance moves, the double meaning dialogues, the glorifying of eve teasing, songs that have lewd lyrics which insult women are accepted by all of us in the name of a ‘masala’ film. Our kids hum the Sheela/ Munni songs and we have no problem with that! Bollywood films are very much part of Indian pop culture. This is what the world thinks we are and it represents us abroad. Is this what we are showing the world? Is this what we enjoy and show our children? Sadly, yes.

It’s things like this that are the dangers to the real Indian culture. But again, it’ all about freedom of choice. As long as it in the law, we have the right to do what we want, to practice what we think suits us, to dress how we want to , to listen to the music that appeals to us, to dance to our heart’s content however we like, to love [within lawful limits] and to pass on to our children what we think is Indian culture.

The law decides what is right or wrong. Indian culture has a foundation that is too strong to be shaken by us merely celebrating Valentine’s day or wearing a miniskirt or doing hip-hop. What threatens Indian culture is eve teasing, the anti-cultural ‘masala’ in our films and the way our women are being treated.

As custodians of our great culture, it is time we started really worrying about these 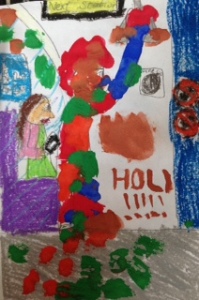 I was travelling on the MRT train in Singapore, and out of the blue, jumped in a multicoloured man. I could tell he had blonde hair and I’m guessing he was born with a white skin. I say guessing because his face was brilliantly splashed with the colours of the rainbow- red, purple, green, blue…….His clothes which looked like what must have been white kurta- pyjama were dyed in a similar hue. He had obviously been to a Holi celebration and here he was uninhibitedly jumping into a fairly crowded train where he stood out- strikingly beautiful. I am surprised that I was the only one staring at him. With pride and with respect. The last time I played Holi was decades ago and here was a Westerner in a foreign country[ not India or his own land] celebrating our Indian festival. I had a feeling of deja vu.

Many years ago, in London, I was patiently, almost patronisingly spelling out an Indian recipe to a Welsh friend. I started explaining to him what garam masala was and suddenly he declared he usually makes his own garam masala at home in his grinder. To say I was left speechless, is an understatement.

On another recent occasion, I joined a yoga class in Singapore. When I went for my first class, barring the teacher and one student who was Sri Lankan, everyone else was non-Indian. To my surprise, the yoga students were breathing enthusiastically during Pranayama and effortlessly twisting and contorting themselves into various yoga poses like Sarvanga Asana. Here I was, from the land of yoga struggling against my rigid creaky joints and willing myself into a dignified Padmasana.

Again recently, my Aussie friend in Singapore was telling me of a place she regularly frequents where they serve lip smacking Indian food on banana leaves. I still haven’t been to the place but I’m still in shock that it was her who told me about this place. Just made me realise that we Indians do sometimes forget our culture and traditions and it takes a foreigner to remind us of what we gave to the world.